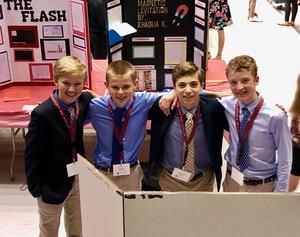 May 4th Illinois Junior Academy of State Science Fair at Southern Illinois University. Both teams represented FHC tremendously and competed against approximately 600 other top Illinois teams ranging in grade levels from 7th grade through Senior High School Advanced Placement.  Competing against the State’s best and brightest, the same criteria used for the oldest students was also used to judge the competition’s youngest. In true form, our two teams competed strong and were victorious.

William and Stephen tested three water quality variables (pH, nitrate and dissolved oxygen) at different locations along Lake Michigan shore; a typical Winnetka beach site, a beach near a business/production site, and a site where the Chicago River emptied into the lake, to see how the various locations affected the quality of the water.

In all, these gentlemen did an excellent job of following the Scientific Method of Investigation.  They researched well, carried out wonderful experiments, analyzed their data precisely, and shared their findings like true scientists.  A big thanks goes out to the parents who helped these students and a special thanks goes to Dr. Birmingham for acting as a judge at the state fair.